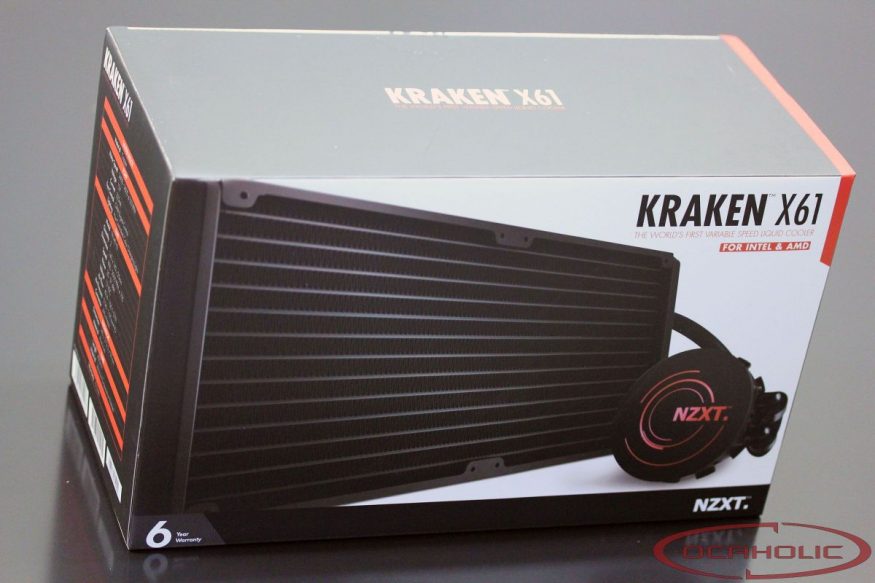 With the Kraken X61, NZXT has an all-in-one watercooler in its portfolio, which comes with the a rather slim radiator and two 140 millimeter fans. At a first glance the design is looking good while you get a black radiator and fans with white rotor. Overall we’re now curious to find out what this cooler can do in terms of cooling and noise levels.

After the Kraken X31 today we’re taking a look at the bigger brother: the NZXT Kraken X61 liquid cooling system, which, according to NZXT, should be compatible even with small cases and tighter spaces, due to a 27mm slim dual-radiuator. Apart from that there are kink-resistant tubes, which allows for tight routing even in very small cases. Overall this cooler is well made and with its black and white color scheme it’s easy to integrate into the design scheme of lots of builds. The bundle includes two 140mm PWM fans with white wings and black frame. The mounting system supports most, if not all, recent Intel and AMD socket CPUs.

If you wonder which company is actually the OEM behind this cooler, then we can tell you that this is a typical closed-loop cooler from Asetek.

As you can see from the picture manufacturing quality of the Kraken X61 is on the level it should be. The radiator itself has been made from aluminium and there are the usual flat pipes, which increase surface area. The cooling block features a copper base-plate with pre-applied thermal compound. To be a bit more precise the dimensions of the Kraken X61 are 280mm x 27mm x 140mm (WxHxD). According to the specifications NZXT equipped the Kraken X61 with two high RPM fans, which rotate with up to 3600 RPM. In the case of the sample we received we measured a maximum fan speed of almost 1’980 RPM when set 12V, which is quite a bit less. But honestly, we’re not unhappy to find a slower rotating fan in the delivery, since otherwise this cooler would be very noisy.

The packaging is quite standard for an all-in-one water cooling system. Alongside the AIO unit you receive two fans, a manual and mounting kits. NZXT bundles the Kraken X61 with two mounting kits, one for AMD and one for Intel-based systems, as well as a backplate is used for Intel sockets. NZXT Kraken X61 is not compatible only with the old Intel socket LGA775. If anything should break down with the Kraken X61 AIO water cooler you get a warranty that covers such event for a whopping six years.